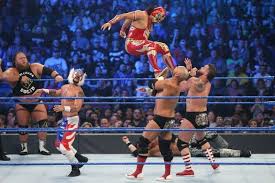 Tonight’s WWE SmackDown on FOX opens up from the closed-set WWE Performance Center in Orlando. Michael Cole welcomes us and he’s joined by Corey Graves. They hype tonight’s line-up. Graves says there will be a new episode of Firefly Fun House with Bray Wyatt tonight.

We go to the ring for tonight’s opener and out comes Daniel Bryan as Greg Hamilton does the introductions. We see the Money In the Bank briefcase hanging high above the ring.

Bryan takes the mic and talks about overcome new challenges and trying new things at this point in his career. He’s excited for the most unique Money In the Bank Ladder Match ever, from WWE HQ. Bryan goes on hyping up the MITB matches and says they will risk it all.

Bryan recalls how he cashed in years ago to win the WWE Title from Big Show. Bryan says he is something most people thought was impossible but winning MITB was the pivotal moment in his career.

That’s what spawned The Yes Movement, spawned him headlining WrestleMania and more, to prove he belonged in WWE with the very best. Bryan is excited but he’s also kind of sad.

He was hoping partner, friend and trainer Drew Gulak would get to be in the match with him. Bryan goes on and says King Baron Corbin ruined that opportunity, along with his cronies. Bryan calls Corbin to the ring.

The music hits and out comes Corbin to the stage with his scepter. Corbin scolds Bryan for calling out a king. Corbin threatens Bryan and shows us how Cesaro and Shinsuke Nakamura helped him defeat Gulak in a MITB qualifying match last week, and the post-match attack.

Bryan taunts Corbin for previously failing to cash in and says that makes him a loser. Corbin threatens him again, saying he will end up like Elias.

Read Also: How can remote sensing application use as a tool to fight this pandemic

They have a few more words as the promo goes for almost 10 minutes. Corbin threatens to come to the ring and shut Bryan up. We get ready for the match to start as Cole sends us to commercial.

Back from the break and they lock up to start. Corbin backs off and talks some trash before locking up again. Corbin takes it back to the corner and backs off as the referee counts.

Bryan lands a big kick to the leg. They go to lock up but Corbin rams Bryan back into the corner and works him over with big right hands. Bryan comes out of the corner with more kicks. Bryan takes Corbin down.

Corbin gets back up and connects with a knee to the gut. Corbin drops Bryan with a big shoulder and points to the briefcase. Bryan comes back and drops Corbin by the knee. Bryan delivers several kicks to beat Corbin around the ring.

Bryan takes Corbin back down and works on the leg. Bryan with a kneebar now. Corbin gets to the bottom rope to break it up. Corbin slowly gets up and is limping a bit. Corbin avoids another kick.

Corbin keeps getting kicked as he tries to go in. Corbin grabs Bryan this time and puts him down. Bryan turns it around and has Corbin on the mat face-down.

More back and forth now. Corbin gets up and puts Bryan back down with a right hand to the mouth. Corbin kicks Bryan around and talks more trash in his face.

Corbin calls Bryan washed up while beating him and keeping him down with elbows. Corbin continues the trash-talking, mentioning Gulak and Bryan’s family.

Bryan unloads at Corbin but Corbin cuts him off and takes him back to the corner. Bryan is on the top now, fighting back.

Read Also: since opening of bank accounts are totally free, how then do banks make their profits?

Corbin lands a big right hand, knocking Bryan from the top and then sending him out to the floor. Corbin stands tall and we go back to commercial with the referee counting.

Back from the break and Corbin continues to dominate Bryan, grounding him with a knee to the face in the middle of the ring. Corbin unloads and keeps control.

More back and forth now. They trade counters and pin attempts. They get back up and go at it but Corbin runs out, then back in with a big clothesline. Bryan still kicks out at 2 and Corbin argues with the referee about his count.

Corbin continues talking trash in Bryan’s face. The referee warns him about grabbing Bryan’s hair. Corbin with more offense, including a big knee to the face.

Corbin works on Bryan’s shoulder, keeping him down with more trash talking and strikes. Corbin rocks Bryan back into the corner. Bryan ends up hitting a big suicide dive to the floor.

Bryan comes back in and hits a missile dropkick. Bryan with kicks now, kicking Corbin all around the ring. Bryan applies the ankle lock on Corbin now.

Bryan drags Corbin away from the ropes and stomps on his ankle. Bryan with a big kick to the face for a 2 count, and another. Bryan with a third straight pin attempt but Corbin keeps kicking out.

Bryan continues to kick Corbin’s left leg while he’s down. Bryan sends Corbin into the corner and hits the running dropkick. Bryan runs again but Corbin comes out of the corner and connects with Deep Six.

Corbin covers for a 2 count and he can’t believe Bryan kicks out. Corbin mounts Bryan and talks more trash while pounding on him with rights. Bryan slides out and goes for a half-Crab but Corbin gets the bottom rope.

Read Also: WHY IS NIGERIA LACKING BEHIND IN THE WEST AFRICA IN FIGHTING COVID-19

Bryan yells about going for Corbin’s arm now as he starts stomping on it. Corbin is on the floor now. Bryan runs and goes for a dive.

Bryan goes on and stays on Corbin at ringside until Corbin uses a ladder next to the ramp to hit Bryan with. The referee calls the match.